It's been almost a month; I'm still struggling

Koko died October 3rd. She was 11. This is the 3rd fur baby to whom I've said goodbye. She was a significant presence since I got sick. She was, in fact, a gift for my 40th birthday. I had been ill, not realizing I'd NEVER GET BETTER, for several weeks when we brought her home. With her birth Feb 3rd, she was ready to come home in April; at that point I'd been ill for almost a month. I still expected to recover fully.
When I did not, Koko was there, seemingly equipped with the support I didn't even know I'd be needing. We spent the next 11 3/4 years together. We each had an ongoing battle for our own health.
Koko spent her life dealing with an endocrine malfunction. She struggled with pseudo~pregnancy, bloating, intermittent hair loss, anxiety. After having a single litter of 5, she got an inter~uterine infection and had a hysterectomy.
That little sprite was a force of her own. I miss her a lot.
Her passing snapped into focus the fact that she fought an invisible enemy since very close to the time I was diagnosed. We were kindred spirits. And her body wore out. I don't feel like I had enough time with her. I also feel a large void due to the fact that she was my therapy dog. It's been said that animals are very sensitive to humans being ill. I can attest to the truth in that. Koko slept closer, became quieter, whenever I was having a flare, or a crash. She spent her entire lifetime caring for me. And I, for her. We were a good team.
If her illness shortened her life, what can I expect for mine?
I've learned to live with my condition, but the what ifs? never seem to stop. I continue to find acceptance; I continue to grieve.
RIP Koko Bella Bambina
I love you! 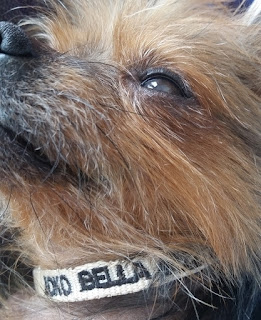